© 2019 Mel Schenck and Alexandre Garel
Subscribe to this blog's feed 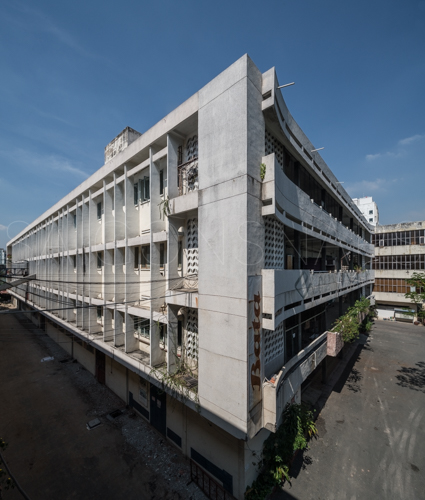 Our book "Southern Vietnamese Modernist Architecture" features beautiful architectural photography that illustrates the outstanding accomplishment of the people of southern Vietnam in developing a mid-century modernist architecture that is extraordinary in the world.

Over the past eight decades of architectural history since the Japanese occupation of Vietnam in WWII, southern Vietnamese architects developed a version of modernist architecture that accommodated the tropical climate and reflected the identity of a newly independent nation.

The Rounded Edges of architecture in Vietnam 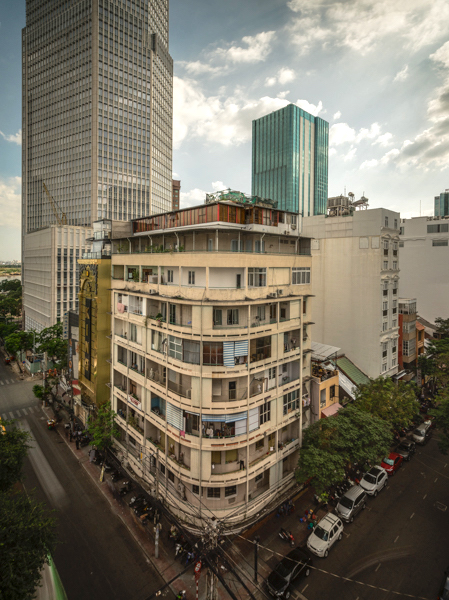 Vietnamese modernist architecture of the mid-twentieth-century is disappearing rapidly in the twenty-first century. I think we can agree on the historical, social, and aesthetic values of these heritage structures. In addition, a strong argument can also be made that the richness of Ho Chi Minh City’s urban environment projects a strong identity that attracts investment and tourism. We need to work together to find ways to protect these historic structures and the Vietnamese identity that they represent.

The video available at the link below provides the context and details of the opportunities for those with vision and money to adapt these heritage structures for new uses or to conserve them.

This presentation by architect Mel Schenck in Ho Chi Minh City, Vietnam, was originally developed for presentation to the design studio of Professor Erik L’Heureux in the Department of Architecture of the National University of Singapore, delivered online on 27 January 2022.

This episode is the second of two episodes comprising that presentation, with this one focusing on reuse and conservation of these historical structures from the mid-twentieth-century, and the first episode focusing on adaptation to the tropical climate.

In addition to its expression of Vietnamese identity in the Industrial Age vocabulary of modernism, southern Vietnamese modernist architecture of the mid-twentieth-century responded in innovative ways to resist the impacts of the tropical climate while enhancing the experience of natural phenomena in the environment. The video available at the link below provides the context and details of the methods used in Vietnamese modernist architecture to accomplish these objectives.

This presentation by architect Mel Schenck in Ho Chi Minh City, Vietnam, was originally developed for presentation to the design studio of Professor Erik L’Heureux in the Department of Architecture of the National University of Singapore, delivered online on 27 January 2022.

This episode is the first of two episodes comprising that presentation, with this one focusing on adaptation to the tropical climate, and the second on reuse and conservation of these historical structures from the mid-twentieth-century.

In November 2020, Mel delivered a lecture on the Information Age and its impact on architecture at the American Center in Ho Chi Minh City, Vietnam. The first half of the lecture focused on the origins and change of reality we are all facing in the Information Age, while the second half showed the new architecture arising out of this new age, especially here in Vietnam.

Mel edited the Facebook video that the American Center produced of this lecture, and he invites you to view it now on his “Architecture Vietnam” YouTube channel. Here is a link to it:  https://youtu.be/ycLaCleUWVY

There are now several new videos in Mel’s YouTube channel “Architecture Vietnam” that deal with modernism and Vietnamese modernist architecture. But this particular video on the new architecture of the Information Age is most important because it points us to our holistic future and the role Vietnamese architects are playing to lead the world in this new architecture. 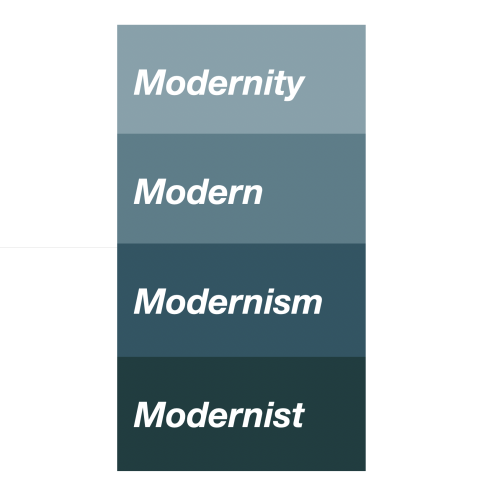 Last April 2021, we posted about the words Modernity, Modern, Modernism, and Modernist, and gave a link to a video on Facebook of Mel’s presentation at the American Center in Ho Chi Minh City on 14 October 2020. The focus on modernity and modernism in that presentation provided the context for the following two presentations on Vietnamese modernist architecture as well as contemporary Vietnamese Information Age architecture.

We have updated the video a bit to delete the introductions and posted it on Mel’s “Architecture Vietnam” YouTube channel. You can find the new video at this link:  https://youtu.be/kIpaN6r5-Sg

These words do not mean the same thing, but they are all related to each other, nesting in each other from modernist on up through to modernity.

Modernist art and architecture derives from the philosophical movement of modernism, which in turn is prominent amongst modern Ideas that arose during the era of modernity. Modernity describes the philosophical, scientific, social, political, and economic conditions that allowed modern ideas, beginning about 500 years ago in the European Renaissance. 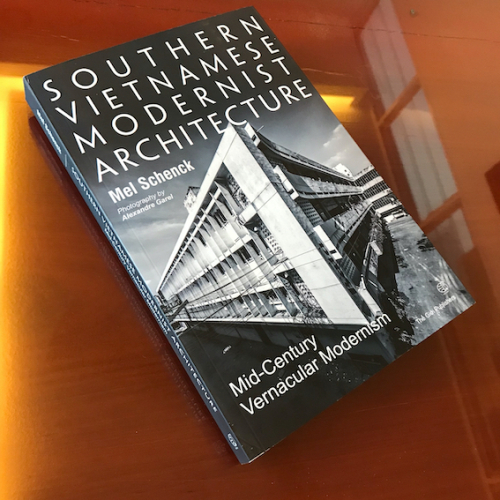 Vietnamese architect Bùi Thúc Đạt has published a wonderful review of our book, and he captures the essence of the book in his review. You can find his original review in Vietnamese language in the Vietnamese Modernist Architecture group on Facebook here:

Here is a rough translation from Google Translate into English language of his review:

The book is written in English with the title "Southern Vietnamese Modernist Architecture- Mid-century Vernacular Modernism". Instead of focusing on introducing and describing works, the author approaches the problem by stringing together historical bases and architectural forms to identify and clarify Southern Modernism in Vietnam.

The content of the book can be divided into 3 main parts including historical origins, architectural features and modernism in indigenous architecture.

The last part of the book deals with indigenous houses throughout South Vietnam. What is interesting here is that the sphere of influence of modernism extended from the big cities to the countryside, where it is often considered difficult to open up to new Architectural-Arts movements. According to the author, this has never happened anywhere in the world, even in the United States, France or Japan, etc., which have many modernist monuments.

The most unfortunate thing is that most of the works in the book have been or are planned to be demolished. It is clear that looking at Modern Architecture in Southern Vietnam, we admire the creativity and intelligence of generations of Vietnamese architects, but we also cannot help but regret the fate of modern architecture in Southern Vietnam when fall into the fracturing of postwar politics and culture. However, from the books of Mel Schenck or Thierry Delfosse,... we still have hope that the value of modernist architecture in South Vietnam will be properly recognized as well as preserved with its role as a heritage of architecture and art of the Vietnamese people. There is another opportunity to understand these words in a presentation that Mel gave at the American Center in Ho Chi Minh City on 14 October 2020. This presentation was live-streamed on Facebook at the time and is available as the video below. Since the presentation was live-streamed, it starts with a static introduction graphic for the first 4 minutes (so you don’t realize you are actually watching a video), the introduction of the program at about 4:15, and then the presentation begins at 7:50. Unfortunately, the sound level was too low for a few minutes, becoming normal around 10:00. The projectionist was also slow in advancing the slides shown in the video, so they don’t always match what I was talking about. Nevertheless, this video could be helpful to you in clearing up the confusion surrounding these 'm-words'. 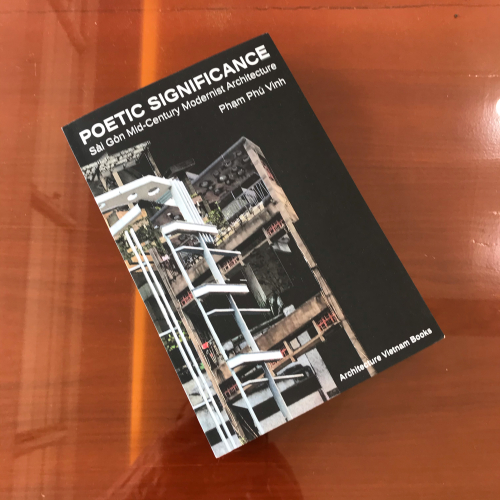 Architecture Vietnam Books is pleased to announce the publishing of the book "Poetic Significance: Sài Gòn Mid-Century Modernist Architecture" by Phạm Phú Vinh. This is the first book written about Vietnamese modernist architecture from the mid-century by a Vietnamese author. This book is published in English and is available internationally in most online bookstores such as Amazon. A Vietnamese-language version of this book will be published later this year in Vietnam.

We are honored to have been given the opportunity to edit this book and publish it so the value of Vietnamese modernist architecture becomes known around the world.

Saigon Portrait of a City 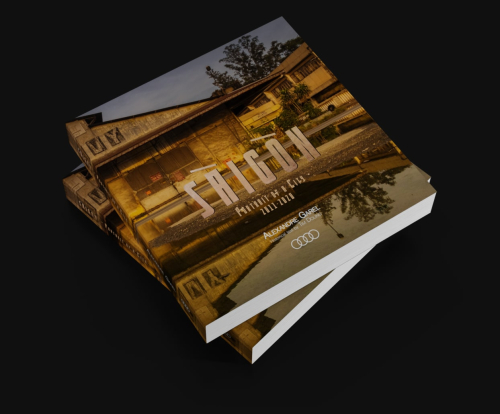 Alexandre Garel has followed up the beautiful modernist architectural photography featured in our book, "Southern Vietnamese Modernist Architecture" by publishing a full-color photo book entitled "Saigon Portrait of a City." In this large-format book, Alexandre presents the scope of the megacity of Saigon, with Vietnamese architecture representing all of the periods of architecture that makes Ho Chi Minh City such a rich environment. His passion for this city really stands out in this luxurious book. Commentary on the city as well as the photo captions were written by the eminent historian Tim Doling. You can buy signed copies of this beautiful photo book on Alexandre’s website: https://www.alexandregarel.com/saigon-portrait-of-a-city 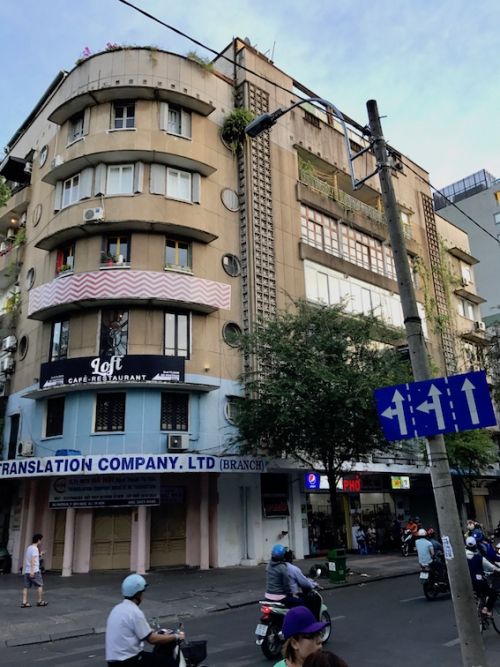 Given my inability to find direct evidence available in Vietnam about mid-century modernist architecture, I am not surprised that errors have already surfaced in our book "Southern Vietnamese Modernist Architecture." I am sure we will find more errors later, but here are three important ones known already:

1. On page 327 of the Vietnam edition of the book, the French-Vietnamese architect for the 95 Pasteur Street apartment building was listed as René Nguyễn Khắc Schéou, as cited in other works about Vietnamese modernism. However, Nghia Nguyen and Thanh Nguyen of the Facebook Vietnamese Modernist Architecture group have both determined, from evidence in the National Archives, that KTS Hoàng Hùng had designed this building.

2. On page 208 of the book, we listed Ngô Viết Thụ as the design architect for the University of Medicine and Pharmacy. Thanh Nguyen found paper evidence that a team of five Vietnamese architects assisted with the design. Although unnamed, three of the architects have been identified as Ngô Viết Thụ, Bùi Quang Hanh and possibly Lê Văn Lắm.

3. On page 162, the prominent Cambodian architect Vann Molyvann is named as the designer of the Embassy for Cambodia at what is now 185 Cách Mạng Tháng Tám Street. Nguyễn Ngọc Sơn has now found significant evidence that Vietnamese architect Hoàng Hùng was responsible for this design.

The best news here is that Vietnamese researchers are now combing through the National Archives and other sources to prove the facts of the development of mid-century Vietnamese modernist architecture.